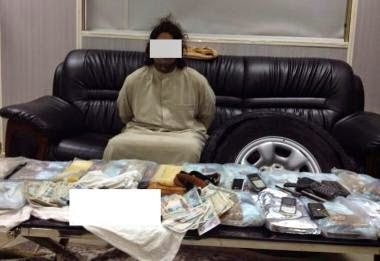 Under the code-named ‘Eid Operation’, Abu Dhabi Police managed to arrest a Gulf dealer in possession of 18.5 kg of marijuana he allegedly planned to sell to young people during the Al Fitr holidays.
Colonel Dr. Rashid Mohammad Borshid, Head of the Criminal Investigation Department (CID) at the Abu Dhabi Police GHQ, said that the Anti-Drug Section staff members at the department managed to confiscate the drugs Sunday night, on the eve of the Eid Al Fitr. “The operation was a success thanks to the clever performance of the team, who tracked down and arrested the dealer,” he said.
Colonel Dr. Borshid dedicated this achievement to the police leadership, stressing that “ADP will always be watchful and ready to protect the country from all who attempt to violate laws, and the Anti-Drug Section is keen to protect the community from the nefarious risks of the drug scourge.” He also said the operation was unconventional, especially because it coincided with the Eid Al Fitr holiday and came at the conclusion of the “They Fooled Me” campaign, organized by the Ministry of Interior to raise public awareness about the damages and risks of drug use and abuse.
Colonel Dr. Borshid said, “The operation was tricky because the dealer was extremely cautious in his activity. However, the anti-drug team of the department managed to uncover the circumstances of the case by using their expertise and cleverness accordingly. They proceeded discretely, by applying their skills to not attract the attention of the dealer, until he was finally arrested and the drugs in his possession were confiscated.” Colonel Dr. Borshid noted that the anti-drug team members showcased a high-level of ability when confronting and arresting dealers, “and we are pursuing them vigilantly at all times and all occasions,” he said.
Elaborating on the details, Colonel Dr. Borshid pointed out that the Anti-Drug Section had received confidential information of the suspect`s possession of a large amount of drugs that he was planning to sell throughout the holidays. “Under the command of Colonel Sultan Suwayeh Al Darmaki, Chief of the Anti-Drug Section at the Criminal Investigation Department (CID), a task force was assigned to investigate the case, locate the narcotics stash, and identify suspect and his whereabouts. The dealer, identified as A.S (age 38), was located and placed under police follow-up; his house in Abu Dhabi was raided. After his arrest and concise legal proceedings, the suspect was found to be in possession of hashish, weighing 18.5 kg,” he said.
Colonel Dr. Borshid added that the suspect had professionally hidden the drugs in his car, inside a tire and sackcloth. A hundred thousand dirhams and other prohibited goods were also confiscated. The case file was brought before the Public Prosecution after the suspect confessed his intentions of using and selling the drugs.
Colonel Dr. Borshid said that the Criminal Investigation Department is making enormous efforts to eliminate the scourge of drugs. All efforts are according to a strategic plan, which aims to fight criminal bands of drug smugglers and dealers. Additionally, the department handles drug abuse cases due to their destructive impact on the youth, and especially during holidays and special occasions where high profits can be made and youths are targeted.
For more information about:
The Ministry of Interior, please click HERE
Abu Dhabi Police, please click HERE
Follow us and check our Social Media feeds on: YouTube, Facebook and Twitter
The Arabic-language text of this announcement is the official, authoritative version. Translations are provided as an accommodation only, and should be cross-referenced with the Arabic-language text, which is the only version of the text intended to have legal effect.