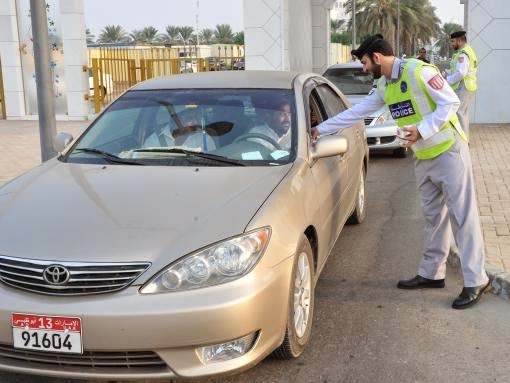 To mark Eid Al Fitr, the traffic patrols at the Abu Dhabi Police Traffic and Patrols Directorate distributed sweets to motorists, and congratulated them on the advent of Eid. This gesture comes in line with Abu Dhabi Police’s keenness to interact with community members on this joyous occasion.

Brigadier Eng. Hussein Ahmed Al Harithi, Director of Traffic and Patrols Directorate congratulated the public. He also urged them to contribute to the efforts aimed at reducing traffic accidents, which may cause deaths and injuries during Eid.

Brigadier Eng. Al Harithi called upon motorists to adhere to legal speeds on the internal and external roads. He urged them to pay attention and to focus while driving to avoid any unforeseen surprises that may occur on the roads. He also asked them to use seatbelts, exercise caution, and to not allow children below the age of 10 to travel in the front passenger seat; instead they should be buckled up in the back seat of the car.

Furthermore, he called on parents and families not to let children play and cross the streets unattended. Brigadier Eng. Al Harithi urged young motorists to drive responsibly and in a civilized manner and not to exploit the holiday cheer to carry out any reckless actions, such as reckless driving, stunts,  and organizing races in residential areas, which may put their lives and the lives of others at risk.

“The directorate will intensify traffic patrols during Eid El Fitr on various intersections, public parks and external roads with heavy traffic to ensure a smooth traffic flow,” noted Brigadier Eng. Al Harithi. He also urged motorists to adhere to traffic laws and to take part in the efforts carried out to provide maximum traffic safety to ensure a safe, traffic accidents free Eid.

He added: “Traffic officers will be deployed on internal and external roads to enhance safety of motorists and road users, as traffic safety is a shared responsibility that requires the concerted efforts of various organizations and community members so that everyone can enjoy a trouble free Eid holidays.

Brigadier Eng. Al Harithi reiterated the importance of adhering to traffic laws and legal speeds and reducing speeds. He also warned against using mobile phones for talking or texting while driving.

For his part, Lieutenant Colonel Jamal Salem Al Ameri, Chief of the Public Relations Section at the Traffic and Patrols Directorate, urged motorists to adhere to legal speeds on the internal and external roads, to pay attention and to focus while driving. He also urged them to use seatbelts, leave a safe distance between vehicles, pay attention to road surprises, reduce speed at traffic lights intersections, and give priority to pedestrians crossing at designated places, wishing them happy and blessed Eid.