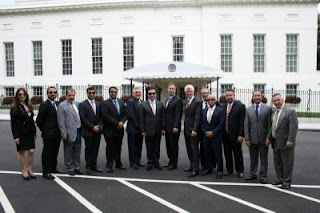 Both parties discussed ways to enhance cooperation, and the expertise that can be provided to the Abu Dhabi Police Emergency Medicine Academy, namely; designing and preparing the Academy’s programs; contributing to Harvard University fellowship programs and continuous education courses; and courses organized by the White House to medical cadre assigned or that will be assigned to work with medical staff providing health care services at royal palaces or presidential palaces (VIP Protective Medicine and Support).

President Obama’s personal physician Dr. Jeffrey Kuhlman gave the delegation a detailed overview of the medical and emergency services that can be offered to the President and the administrative and security personnel that accompany the U.S. president during his visits and tours all over the world.

During the three-hour tour at the White House Medical Unit (WHMU), the Abu Dhabi Police GHQ delegation visited the Presidential Suite, which includes the US President’s Oval Office, overlooking the White House garden known as the Rose Garden.

Moreover, physicians Kuhlman, Tubb and Darling gave a presentation to the ADP delegation on the most important tasks undertaken by the Medical Unit, which provides medical care especially to the US president and his family members, as well as the President Security and Protection staff directly serving the President.

The White House physicians explained that this unit is entrusted with the tasks of preparing and organizing the President’s visits abroad, such as providing proper distinguished daily care, as well as planning and ensuring readiness for any potential necessary medical protection during emergency situations. This includes cooperation with local authorities to identify their resources and status of their medical services prior to the President’s visits.

They also expressed their appreciation for the invitation they received to attend the Emergency Medicine Conference, organized by the General Directorate of Central Operations at Abu Dhabi Police GHQ, on December 8th, in collaboration with the Emergency and Disaster Medicine Section at Harvard Medical School in Abu Dhabi. They stressed their keenness to participate with various workshops and to provide scientific work papers relevant to the Conference’s topics.

During the tour, the ADP delegation got the opportunity to observe hands-on the medical unit’s preparations for President Obama’s upcoming trip to a number of African countries. President Obama’s personal physician, Navy Captain Dr. Jeffrey Kuhlman explained that primary health care is provided at the White House by the medical unit, while specialized care is entrusted to the physicians and consultants of the Armed Forces when needed.

The White House physicians, who attended the meeting, unanimously indicated that the only reason former US President Ronald Reagan survived the assassination attempt against him in New York, in the early eighties, was the mandatory medical training received by Special Protections teams.

Notably, the White House Medical Unit (WHMU) is the unit responsible for the medical needs of White House approximately 7 thousand staff as well as visitors. The Unit provides medical care to the President, the Vice President, and their families in the various White House departments and sections.

Posted by MENewswire at 1:58 PM