MoI Emphasizes the Role of Volunteer Organizations in Juvenile Welfare 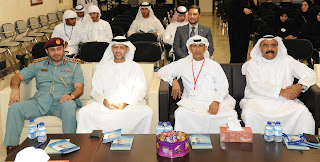 In a specialized workshop

The Ministry of Interior underscored the importance of voluntary organizations in rehabilitating and caring for juveniles through a specialized workshop. The workshop was recently organized by the Human Rights Department of the ministry and was held in cooperation with the Juvenile Care Center’s Skills and Behavior Values Club. It took place in the center’s Abu Dhabi headquarters.

In his address on the occasion, Colonel Dr. Abdullah Muhammed Bu Hindi, Director of the Juvenile Care Center, noted that the workshop supports the efforts of community participation between the various civil society institutions, particularly in the field of voluntary work. He noted that voluntary work supports juvenile care and rehabilitation institutions to assume their significant tasks and responsibilities.

“These efforts are not limited to the period that the juvenile spends within the center, but extends beyond this time to include the timeframe after his release, in a period of time known as aftercare. The aftercare phase is just as important as the previous phase,” added Colonel Bu Hindi in a speech delivered as part of the workshop’s events. Furthermore, he pointed out that the juvenile who returns to his original environment, which had caused his deviation, without a proper aftercare program would be more vulnerable to relapse into the path of delinquency. The process of reform and rehabilitation would be more difficult in such circumstances where follow-up to acclimate a juvenile into his original environment was absent.

He also added that the efforts exerted during the aftercare period are essential and fundamental to the process of consolidating the relationship of the juvenile and his family with the entity that supervised his rehabilitation and behavioral modification. These efforts are also crucial to instill good behaviors that were acquired during his stay in the center and create an atmosphere of hope for him and his family.

Concluding his speech, Colonel Bu Hindi remarked that he hoped that the workshop will be a new start to reinforce the efforts of cooperation and integration to upgrade voluntary service. He thanked the participants in the workshop.

The workshop was launched tackling two pillars. The first pillar focused on the various programs and activities during the period the juvenile spent in the center, which include: social, health, psychological welfare, family relations, behavioral values, national heritage, and recreational activities. As for the second pillar, it addressed the issue of integrating the juvenile in the community and helping him to adapt to the natural environment through family ties, going back to school, staying away from bad companions, and following-up cases of mental disorder.

At the end of the workshop, commemorative gifts and certificates of appreciation were distributed.

The workshop was attended by Yousef Mohammed Al Naqbi, Director of Social Welfare at the Ministry of Social Affairs, and Walid Al Ibri, Director of the school in the Juvenile Care Center.

Photo 1: Group photo during the workshop

Photo 2: During the work shop