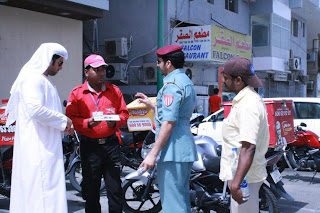 Major Salah Abdullah Al Hemairi, Head of Al Ain Traffic Section noted that the Traffic and Patrols Directorate at Abu Dhabi Police will begin imposing penalties on all types of motorcycles that overtake  between vehicles at stop lights and intersections, causing traffic accidents.

For his part, Captain Rashid Mohammed Al Shamesi, Acting Manager of the Public Relations Branch noted that officers from the Public Relations Branch at the Section have been distributing awareness brochures to motorcyclists at a number of sites where they gather in different areas of the city. This comes in line with the awareness campaign carried out by the Traffic and Patrols Directorate at Abu Dhabi Police.

“The awareness brochures urge motorcyclists to observe the road lanes, and avoid changing lanes suddenly or trying to enter other vehicles’ lanes so as not to put his life and the lives of other road users at risk”, indicated Captain Al Shamesi.

Furthermore, he emphasized that these tips are part of the Ministry of Interior’s strategies’ initiatives to curb accidents and enhance traffic culture among motorists throughout the year. They also support the continuous vigorous awareness efforts exerted by Abu Dhabi Police in this regard, represented by the Traffic and Patrols Directorate, with a view to promote traffic and security awareness culture, as well as provide guidance for motorists.

Photo: During the distribution of awareness brochures to motorcyclists.