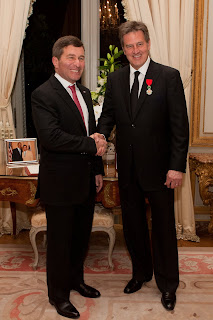 (BUSINESS WIRE)-- Tupperware Brands Corporation today announced thatChairman and Chief Executive Officer Rick Goings has been named a Knight in the French Legion of Honor. He was awarded this honor by Marie-France de Chabaneix, Président d’honneur of Nutrimetics, France at a ceremony held in Paris at the residence of Charles H. Rivkin, United States Ambassador to France and Monaco. President Nicolas Sarkozy has extended the distinction of Knight to Goings for his service to and support of women and disadvantaged children. Initiated by Napoleon Bonaparte in 1802, the Legion of Honor is the highest award presented to non-French citizens in recognition of military, cultural, scientific, or social contributions to France.

“It’s truly an honor to receive the distinction of Knight,” said Goings. “For nearly 20 years, I have been committed to Tupperware’s vision to enlightening, educating, and empowering women by offering a path defined not only by monetary gain, but by the desire to improve her quality of life and that of those around her. We provide her with the foundation she needs to build a better life.”

“With high esteem, the French Republic recognizes the dedication and accomplishments that Rick Goings has made to the role of women in developing nations,” said Pierre Vimont, French Ambassador to the United States. “This honor is a sign of the French Republic’s gratitude and appreciation to his commitment.”

In addition to serving as Chairman and CEO of Tupperware Brands Corporation, Goings has served two terms as Chairman of the Board of Governors with distinction and has been named Chairman Emeritus of the Boys & Girls Clubs of America. He is also a director of Business Executives for National Security, a participant of the World Economic Forum (WEF), a member of the Board of Executive Advisors for the Yale School of Management’s Chief Executive Leadership Institute, and serves on the Board of Trustees of Rollins College.

Previously, Goings has been recognized by the People’s Republic of China in Beijing with the Marco Polo Award for his visionary leadership and his significant role in China’s economic development. Additionally, the Boys & Girls Clubs of America honored Goings with their highest award, the Herbert Hoover Humanitarian Award, for his outstanding leadership as its National Chairman.