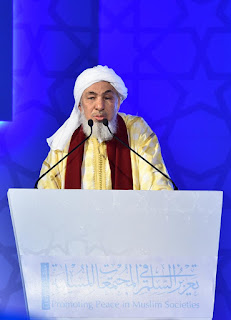 HE Sheikh Abdallah bin Bayyah: “The world is facing a wave of extremism, sectarianism and violence as a direct result of our failure to promote Islam’s culture of peace and mercy”

Two-day conference to explore concept of the contemporary nation state

Organisers have announced that this year’s two-day conference will be centralised around the notion of nation state and its relationship with Islam’s ontological principles that aim to sustain peace. The third annual Promoting Peace in Muslim Societies forum, which will be held in Abu Dhabi on December 18th – 19th, will draw the world’s leading Islamic scholars, academics and leaders to explicate the problems facing the Muslim world and how we can collectively address them.

HE Sheikh Abdallah Bin Bayyah, President of the Forum for Peace highlighted that the most pressing need for scholars, intellects and politicians is to collaborate & address the need for peace. “There is no other option whilst we see the ongoing spread of destruction, death and sectarianism' he added. The world is facing a wave of extremism, sectarianism and violence as a direct result of our failure to promote Islam’s culture of peace and mercy. This year’s forum will seek to explore the best ways to find peaceful solutions to rectify the negative and distorted image of Islam in some parts of the world. In addition, the forum is a ground-breaking initiative that will serve as an intellectual endeavour to refute extremist ideologies with a culture of peace and tolerance, which has been a driving force of Islam.”

“the importance of the third forum is to continue our efforts in crystalizing the primary narrative of Islam, so that our religion is not hijacked by extremist voices.”

He added, “Incorrect ideas have always posed a threat for Islam, however, the forum will promote a positive change through the use of Islamic legal methodology and create awareness about Islamic values and guidelines which has always been subject to criticism and conflict.”

The forum will focus on seven topics of discussion, each aimed at sharing knowledge and expertise:

1. The concept of nation/Umma state in the Islamic history; past and present.

The topic attempts to set the stage for the discussion. The historical progression of the umma will be discussed starting from the origin of Islam towards the end of the Ottoman Empire. This will then follow with how the ideological paradigm of nation states has evolved and metamorphosed into modern constructions of nation states post-caliphate.

2. The Islamic nature of a state

3. The concept and context of a nation state

This discussion will look at the concept of a state and its national characteristics in the modern age.

4.The state’s sovereignty in an age of globalisation

In this section, a variety of Muslim leaders from across the globe share their perspectives in light of the new geopolitical platform. Their insights will involve understanding the newly grounded state’s sovereignty in a wielded discussion of Islamic legal theory and international politics.

5. The nation state’s role in strengthening and promoting peace

This discussion will focus on the issues of equality, regardless of affiliations as well as the legitimacy of the use of force to apply the law and protect the freedom of all citizens.

The previous topics are refocused in this section on the UAE. This dissects in how the UAE is implementing and sustaining the pillars of peace. Further developments will also be mentioned to explain how UAE attempts to maintain itself as a role model as a state of peace.

7. Marrakesh Declaration on the Rights of Religious Minorities

A review of the 2016 Marrakesh Declaration is brought into a conclusive focus which affirms the unity of the society in terms of religious pluralism and freedom of religion. This topic summarises the points addressed in the previous sections in how Islam can be actualized in practice that can have a lasting, peaceful impact on Muslims and non-Muslims alike.